Introduction to ‘Banking Regulation in Africa: The Case of Nigeria and Other Emerging Economies I:

The Foundations of Banking Regulation in Nigeria 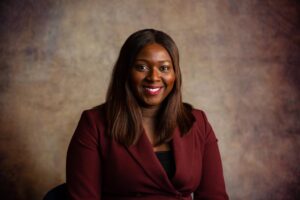 In her new trailblazing new book titled Banking Regulation in Africa: The Case of Nigeria and Other Emerging Economies, Dr Folashade Adeyemo addresses the gap in knowledge on banking regulation in Africa. Over the following weeks, she will set out key themes from this exciting text.  In this first blog of the series, she unpacks the historical underpinnings of the Nigerian banking infrastructure. It is necessary to provide this context in order to understand the foundational principles of the Nigerian banking law as well as its modern  structure. She commences by exploring the structure introduced by the colonial government. In subsequent posts, she considers the newly enacted Banks and Other Financial Institutions Act 2020, judicial approaches to banking law cases, and reflect on themes discussed in the upcoming book launch, which takes place Wednesday 23 March 2022. Details on how to register can be found here.

Given their multifaceted features, banks are special in nature.  They play an integral role in any economy, whether developed or developing. Banks carry out important everyday tasks such as taking deposits, providing payment facilities, funding for individuals, other organisations, and governments. They also serve as a catalyst for economic growth. It is therefore imperative that banks are adequately regulated and supervised, to ensure that they yield growth into other sectors. However, much of the current discourse on banking regulation is led by renowned scholars in the field, such as Campbell, Lastra, Singh and Lui, who have focused on developed economies such as the UK, the US and the EU. Other scholars have considered banking regulation from the perspective of Asian tigers such as Zamorski and  Douglas. While banking crisis are studied for lessons and insights into financial regulation, the focus is on these same jurisdictions. For example, the global financial crisis 2007-2009 is well documented;  much of the literature focuses on the mischiefs of the erstwhile regulatory system and have provided recommendations that have aided improvements to the regulatory architectures of developed economies.

Comparatively, literature on the African banking and financial regulatory system is sparse. Hence, Dr Adeyemo seeks to fill the gap by focusing on banking and financial regulation in Sub-Sahara Africa. This ground-breaking text is the first to critically examine banking regulation and provides insightful, instructive and informative commentary on Nigeria banking and financial regulatory journey. It traverses various cycles of bank failures and crises. Though Nigeria is its core focus, the book also examines the regulatory environments of other leading African economies, namely, South Africa and Kenya. To provide a balanced view, the regulatory environments of the UK and the US are also considered, particularly, their regulatory responses to the global financial crisis 2007-2009. Although many African countries were insulated from the crisis because they did not engage in sophisticated transactions or the subprime market, the insights for effective regulatory systems are of benefit to all.

The Foundations of the Nigerian Banking System 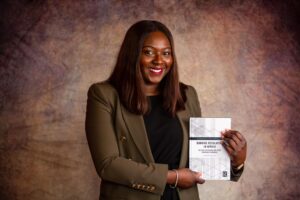 The first three chapters of the book explore Nigeria’s journey towards stable, well-grounded regulatory framework for banks. An understanding of the origins of the Nigerian banking framework provides context for the subsequent discussions. The book traces the journey from the colonial era. During this period, two types of banking systems were established: indigenous and colonial. The colonial banks were owned by the British doing business in Nigeria, and the indigenous banks were wholly owned by Nigerians. The two banking systems experienced challenges. Majority of the indigenous banks crashed within the first few years of establishment, including the Industrial and Commercial Bank, The Nigerian Mercantile Bank, and the Nigerian Penny Bank. In 1933, the National Bank of Nigeria began its operations and became one of the first indigenous bank to avoid the historical trend of banking failure. This is examined in chapter three of the book.

The mass failures of banks in Nigeria, led to the creation of the Paton Committee of Enquiry. This committee, established by then-colonial administration, was charged with examining the issues leading to banking failures/crises, identifying the exact number of banks in existence and proffering recommendations to improve banking in Nigeria.  It produced a report – the Paton report – that identified the banks at the time to be: Bank of British West Africa Ltd; Barclays Bank (Dominion Colonial and Overseas Ltd; The National Bank of Nigeria;  Agbonmagbe Bank Ltd (now popularly known as Wema Bank and is Nigeria’s longest surviving indigenous bank); and the African Continental Bank Ltd. The enquiry concluded that at least three of the six banks had gone into liquidation, resulting in losses to depositors’ funds. Further investigation revealed that the prospectuses which was originally issued by these banks were in fact misleading. One of these banks listed itself as being affiliated to leading banks in London, which, of course, served as an attractive marketing tool to attract to customers.

Reflections on the Paton Report

The Paton Report played an important role in the creation of Nigeria’s first banking law, the Bank Ordinance 1952, which introduced regulatory structure into the banking space. The report also contained core recommendations geared towards improvement of the banking sector, such as providing a clearer definition of the term ‘bank’; a minimal capital base requirement for banks, and a requirement that all banks be licenced. Finally, the report concluded with several important observations, which contributed to the mass failure of banks during this period. These include the absence of adequately regulating banking activities, which arguably may have prevented the demise of the indigenous banking system; poor knowledge of basic corporate governance practices; and inadequate capital bases of banks which made the task of regulating banks challenging.

The Paton Report is crucial to understanding banking development pre independence and the need to improve the regulatory environment. The Report itself was induced by the rapid registration and eventual demise of indigenous banks during this era. Many of these recommendations of the Report are indeed visible in the Nigeria’s first banking law, the Bank Ordinance 1952 and feature again in the subsequent legislation such as the Bank Ordinance 1958; the Central Bank Ordinance 1958, Banks and Other Financial Institutions Act 1991; and the newly enacted Banks and Financial Institutions Act 2020.

More about the foundations of the Nigerian banking regulatory structure can be found in the book, which illuminates this under-explored area. It contributes to the sparse knowledge in this field by advancing the findings of the Paton Report and addresses the key legal issue of why effective regulatory and supervisory frameworks are imperative for a thriving banking system. 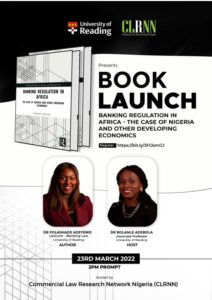 Banking Regulation in Africa: The Case of Nigeria and Other Emerging Economies was published in December 2021. It may be purchased on Routledge, Amazon or Blackwells.  The book launch will hold on Wednesday 23 March at 2.00pm. It will be hosted by  Dr Bolanle Adebola, Associate Professor in Law, University of Reading and convenor of the Commercial Law Research Network Nigeria CLRNN). Details on registration for the book launch may be found here.

Dr Folashade Adeyemo is a lecturer at the University of Reading. She publishes in the field of banking and financial regulation, and has a specific interest in bank insolvency, company law and whistleblower protection. She is the founder of the Global South Dialogue on Economic Crimes,  an interdisciplinary platform with the objective of advancing dialogue, research, and capacity on economic crime. She may be contacted at F.Adeyemo@reading.ac.uk